1963: My father Enzo Bertelé, former manager of an important company, together with his brothers Ugo, Corrado and Elio, established FB, a company operating in rubber molding and in the manufacture of sports equipment for school gyms.

1973: Following a capital increase, Enzo Bertelé decided to leave the company. He had limited capital and a new house to pay for. He then decided to open his own business, based on the passion he had developed in the previous years. 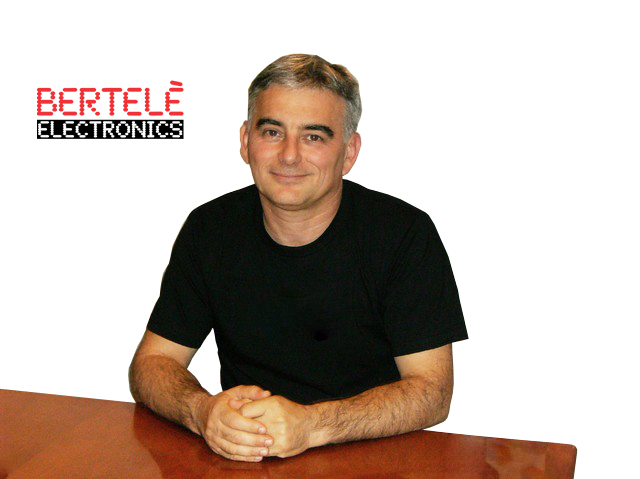 1979: While still a student I, Marco, Enzo’s firstborn son, approached the world of electronics developed by our company. I fell in love with its amazing possibilities for development: it allowed conceiving, designing, creating and— as if it were a magic trick— showing customers a beautiful, carefully constructed and often exciting product.

At the same time, my brother Daniele developed the mechanical division within the company, achieving considerable success in the sector of stands and seats for stadiums and sports arenas.

1985: Sitting in my booth at EUROPOLIS in Bologna (later SAIE 2), proud of my innovative scoreboards, I saw in front of me a rudimentary resistance light bulb scoreboard with color graphics, produced by a then competitor of ours. I was fascinated and realized that what I wanted to dedicate myself to was precisely that: creating large color video screens. That would prove an important technological challenge, appealing to the world market and characterized by strong prospects for future growth.

1990: The dream came true with the design and creation of 6 video screens, manufactured with the then emerging LED technology—using only 3 colors, as the blue LED had not been invented yet—and installed in the Fijlkam sports hall in Ostia. But above all, it came true with the supply of one of the very first full-color LED video screens in Italy at the Courmayeur ice palace, which took place shortly afterwards.

Since then, hundreds of indoor and outdoor video installations have followed in the sports and advertising sector, both in Italy and, above all, abroad.

A SHARED VISION, FOR OVER 40 YEARS.

Pursuing ethical models, where profit is a means to progress rather than ultimate goal of our work. Working with enthusiasm and passion, in a harmonious working environment, is the basis of an innovative and reliable product.

“From the beginning, I’ve always been guided by my passion and ill-concealed pride in building beautiful things capable of amazing customers. This is what I still do today, strongly believing that the best is yet to come, with the help of my wonderful team.”